For pianist and composer Rembrandt Frerichs (1977), a new musical adventure began when viola player Michael Gieler invited him for an open conversation. Gieler is a solo violist with the Royal Concertgebouw Orchestra and leader of the IJ-Salon series, a cross-border ‘playground’ of chamber music with musicians of the Royal Concertgebouw Orchestra. Gieler planted a seed that grew into a composition commission for Rembrandt’s first Piano Concerto. Rembrandt took up the challenge.

Rembrandt Frerichs already came into the spotlight through composition commissions from leading musicians like  Kian Soltani, Liza Ferschtman and Amsterdam Sinfonietta. His star is rising further now that musicians of the Royal Concertgebouw Orchestra have asked him to compose a brand new piano concerto that features himself as soloist.

It is a logical consequence of his artistic choices over the past decade that Rembrandt has come to be known as a forward-thinking free spirit for musicians who want to break out of the confines of their professional practice. In his projects, he makes every effort to test both his own limits and those of his fellow musicians. On this album this can be heard, for example, on the track “Elasticity,” where the strings are plunged into a rhythmic world not yet common to classical musicians.

It’s easy to forget, but imagine that you could travel in a time machine to a Beethoven or Mozart concert and you would notice that Ludwig and Wolfgang mainly played their own work. Moreover, they often did not have a notated piano score. Later, one of these performances was transcribed and notated for publishing purposes. This score, passed on from generation to generation, has led to the widespread misconception that in what we now call classical music all the notes were always the same. The approach Rembrandt takes here goes back to the original performance practice of the great masters. It shows that classical and jazz are not as far apart as is often thought.

As in their time, a performance of the piano concerto is an experience of tailor-made music for the individual piano soloist. Because of the improvisations, no two concerts are the same. 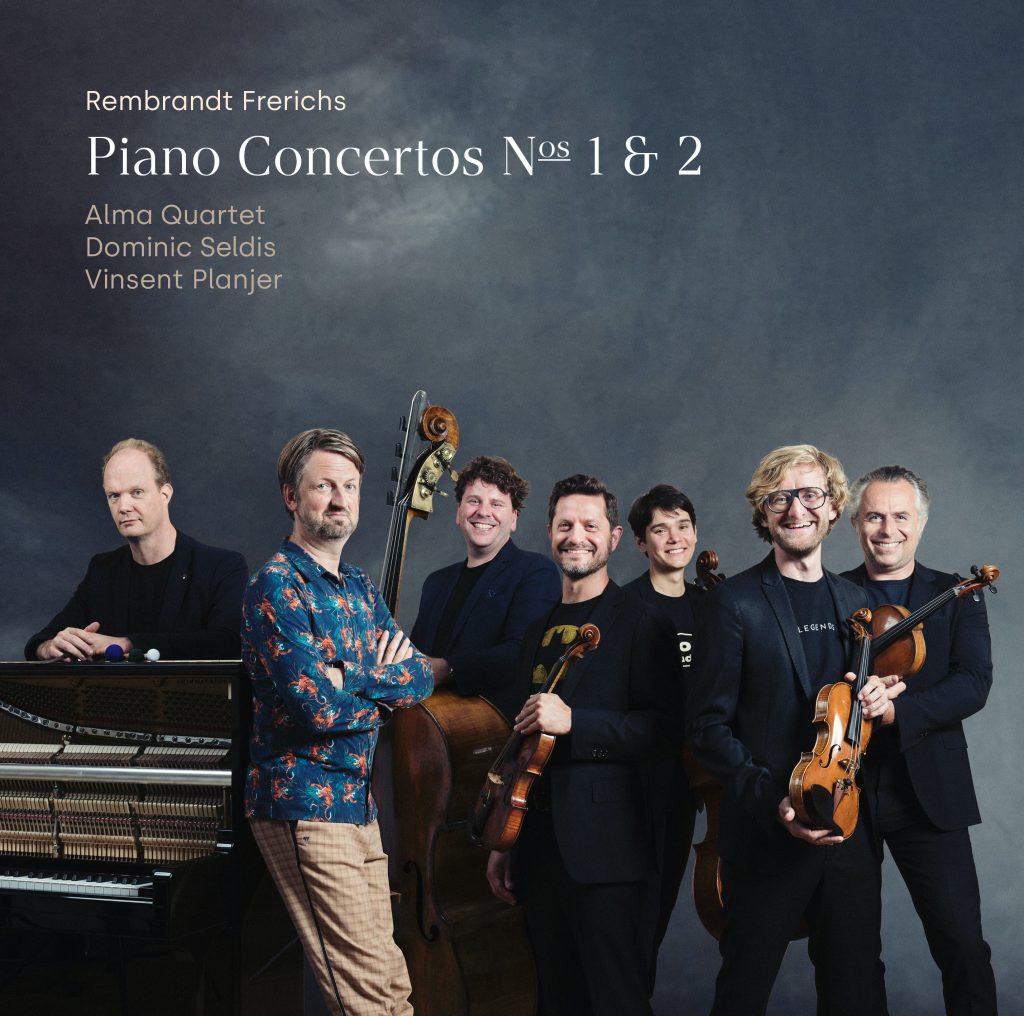 Rembrandt: “For a long time it was unclear how the concert would sound in its entirety. The string players didn’t have a picture of the embedding of the piano yet. At the rehearsals I would say something like: I’m going to do something here, but what that is I’ll figure out during the concert. The penny didn’t drop until we played for an audience for the first time at the Oranjewoud festival and the musicians heard the piece in its entirety. You could truly read on their faces, ‘Aaaah so this is what he meant…’ That moment can be heard during the second movement of the piano concerto no. 2.”

As a listener, you experience the musical battle between ensemble and piano; an exhilarating ritual dance of two partners. A new path is taken as improviser Rembrandt combines the best of two worlds with the classical musicians on stage. As with Ravel, Debussy and Gershwin, the composer himself sits at the piano.

Rembrandt: “I want to take the audience into my ‘Black page / white page’ approach, which is to say that the listener is aware that the classical musicians on stage have an actual part with black dots on paper. I, on the other hand, have a completely blank page. I re-imagine the conversation with the orchestra each concert, providing musical commentary and a counterpoint, as on ‘Cadenza 2’ from the first piano concerto. Classical pianists play from a score. With my piano concerto, I take a clear stand in order to shake up performance practice by involving the audience in the creation process. In doing so, I am following the practice of both Mozart and Beethoven, who usually did not write out their piano parts either: they knew the parts of all the other instruments by heart but only created their parts during the concert. My starting point in this is my many years of improvised jazz background, which I bring to the fore in the last movement of the 1st piano concert, ‘Blue Pencilled Outlines’. In how this comes together, that adventure, we take the listener with us during our concerts.”

Hear how boundaries blur during this pianoconcerto: between classical and now, old and new music. It is not without reason that Dutch newspaper Trouw wrote about pianist Rembrandt: “he makes music for the future in which boundaries disappear from the ear.”

Find on all platforms.

With the line-up of fortepiano, violone and Whisper Kit, the Rembrandt Trio have created a totally new sound over the past few years. It reflects perfectly their love for jazz, European Early music and art music from the Middle East. Read more